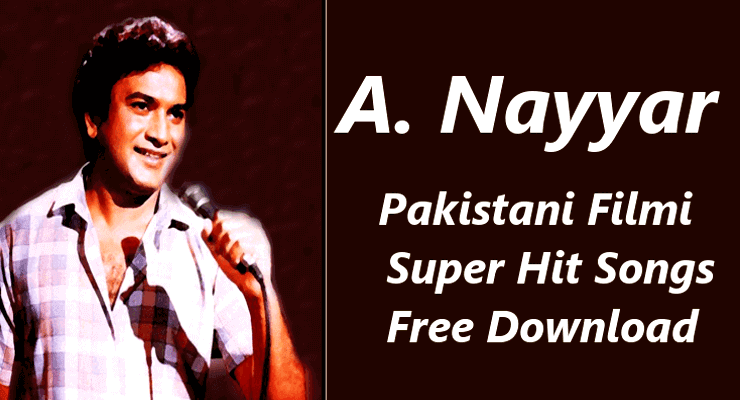 A. Nayyar Pakistani Filmi Music Singer. He was a legendary Pakistani Filmi Playback Singer. He sang great songs in Pakistani Films, and also he was great Pakistani Classical Music and Pakistani Folk Music Artist.  His first popular Filmi Song was “Yunhin Din Cut Jayen“, and “Yuhin Shaam Dhal Jaye” was a  double act with Rubina Badar, composed by A. Hameed and also others.
His most popular song is a double act with Naheed Akhtar “Film Kharidar; “Sathi Mujhay Mil Gaya”, and also he has sung more lot of hit songs in Pakistani Filmi Music. A. Nayyar won five Nigar Awards in 1979, 1985, 1988, and 1989.
A. Nayyar Ahmed Rushdi and Akhlaq Ahmed remained dominant playback Singers in the Pakistani Film Industry from 1970 to 1980. He got playback music training from Ahmed Rushdi, his first appearance on the TV show was Naye Fankar in 1974 after which he started his playback journey. I have selected the most popular Pakistani Songs of A. Nayyar.

A. Nayyar was born on 14 April 1955, he was a great Pakistani Pop Music Singer and Pakistani Filmi Music Singer, he creates a good name in Pakistan Music. He started his career in 1974 with a double-act song. This great singer died on 11 November 2016 at his residence in Lahore due to cardiac arrest after a prolonged illness.