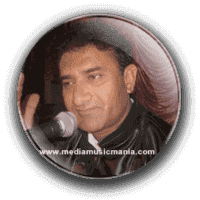 
Allah Dino Khaskheli Sindhi Classical Music Singer. He was  born on 25 January 1966 at Mirpur Bathoro Sindh. He has sung lot great Sindhi Folk Music. He is great Sindhi Folk Music Singer, he created great name in Sindh Music. He got Music training from his father. He has many albums of Sindhi songs to his credit. He sung poetry of Shah Abdul Latif Bhitai R.A, Sachal Sarmast R.A and others.

He played a great role in popular Sindhi Cultural Music, Sindhi Songs all across the Sindh. He enriched the world of music and enthralled the audiences with his masterful artistry. His soulful rendition has been bringing solace lot of hearts.

He has sung his classical Lok Music on Radio Pakistan and local TV Channels, Marriage ceremonies, Mela and Shrines of Bizrigs in Sindh and other local Mehfils. I have selected most popular Music of  Allah Dino Khaskheli.

Sindhi love and affection songs Sindhi Classical Music are still very popular such as Moriro, epic story of Dodo Soomro,  Chanesar Soomro, to the chivalrous character of Marui which recognizes it among the contemporary old stories of the locale.