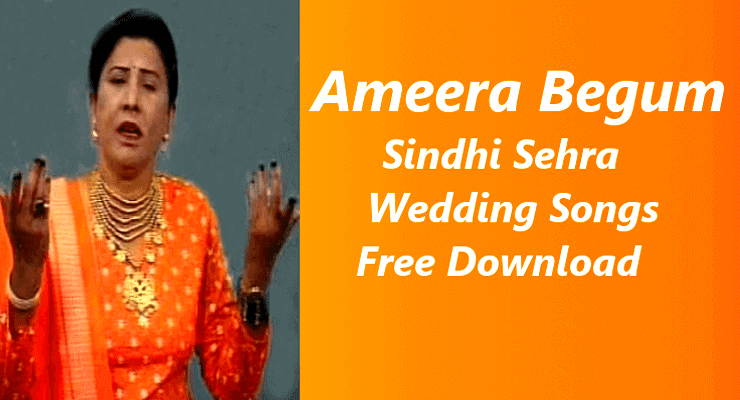 Ameera Begum Sindhi, Sindhi Sehra, Sindhi Lok Geet Singer,  he performed in Marriage ceremonies, and on Sindhi Local TV Channels, her Sehra, and Geets are very popular all over Sindh. She started singing in the local areas of Sindh.

Ameera Begum is a very popular Sindhi Sehra Artist and especially in Sindhi Music, she had sung Sindhi Lok Geet, Sindhi Sehra on the occasions of marriage ceremonies and other happy occasions in Sindh.

Due to her great struggle in Sindhi Lok Geet she earned a good name in Sindhi local TV Channels, she has sung in Sindhi Dramas such as Lok Geet and Sehra. She sang in open air Mehfils and in rural areas marriage ceremonies.

Her communication with Classical Music. Ameera Begum had sung a lot of great Sehra Music in the Sindhi language, I have selected the most popular marriage Sehra, which you can download with one click only Artist Ameera Begum.
Biography Sindhi Sehra Singer Ameera Begum
Ameera Begum Sindhi Sehra Artist. She is the most popular Sindhi Lada Sehra Music Artist, she has sung Sehra for Marriage occasions in the Sindhi Language. She creates a great name in Sindhi Music, she is a very popular Sehra Singer of Sindh after Jee Jee Zarina Baloch.
Ameera Begum introduced herself from village to city and she is very popular on radio and TV. People of Pakistan who are settled in foreign countries like such memorable Sindhi Sehra, Sindhi Cultural Lok Geet. She has sung great songs and also sung in the style of Mai Bhagi, Mai Noor Bano, and other Sindhi Singers.