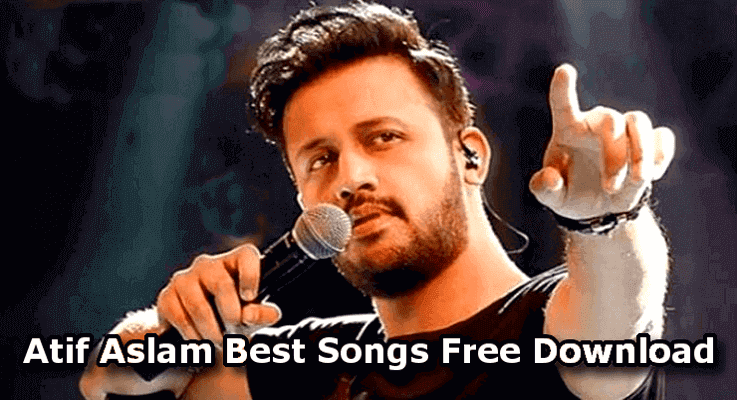 Atif Aslam Pakistani Pop Music Singer. He has sung great songs such as Pakistani  Folk Music, Pakistani Filmi Music, and Folk Music and he creates a great name in Pakistan Music. He mos the most popular Artist of Pakistani folk music and Bollywood music.
In the starting, he decided to record from his own pocket and his first album was released “Aadat” and Atif Aslam decided to continue his carrier as a solo artist.  After the success of the album Adat and release his hit album was titled “Jalpari” with the best song such as “Bheegi Yaadein“, “Ehsaas“, “Mahi Ve“, and “Ankhon Say“.
Atif Aslam came up with his own sound and this album was very popular among the youth of Pakistan. Atif Aslam started Music on a Global Platform, he started his career as a playback Artist in Bollywood with his popular song “Wo Lmahey” for “Film Zaher” and Indian audiences liked his super hit song.  I have selected below the most popular Pop Music, Filmi Music of Atif Aslam.

Artist Aslam was born on 12th March 1983 in Wazirabad, Pakistan, later he shifted to Lahore Pakistan, and started his education. In the starting, he played Cricket and later he set his mind to be a Pop Music Player in Band.
He took part in many singing competitions in college and won a lot of prizes. Atif Aslam first Pakistani Artist selected for the Indian Film Fare awards two years in a row. Atif Aslam was selected as an actor and took up the challenge to star in a movie called “Bol”. Atif Aslam in a short period of 07 years, is now he is the biggest superstar in Pakistan.