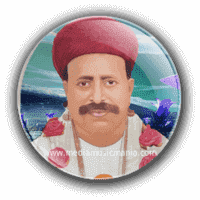 He was a humble, generous and compassionate man. He wore a long Kurta and a red head gear. He sang and danced at Bhagats. Bhagat Kanwar Ram  sung with devotional, singing and dance in Sindhi Folk Music. Bhagat Kanwar Ram was  used to sing creations of famous saints poets Mira, Kabir and Hazrat Shah Abdul Latif Bhitai R.A. and he was created great name in Old  Sindhi Music.

He sung “Sindhi Songs“. It happened that during singing time, when Bhagat Kanwar Ram sung the “Raga Sarang” the clear sky started to fill with rain clouds and a heavy rain followed. I have selected below most popular Sindhi Super Hit Lok Classical songs of Bhagat Kanwar Ram.

His family out of that money, he would instead distribute between poor and needy people because he believed that his touching voice was a gift of God. Bhagat Kanwar Ram was assassinated in communal riots in Sukkur Sindh on 1st November 1939 at Rukari (also known as Ruk) Railway Station.