Fozia Soomro was the most famous Sindhi Folk Music artist she was very popular all over Sindh Pakistan, especially she has sung Sindhi and Marwari songs, and her songs have listened to the root areas of Sindh and India such as Rajhastan territory. 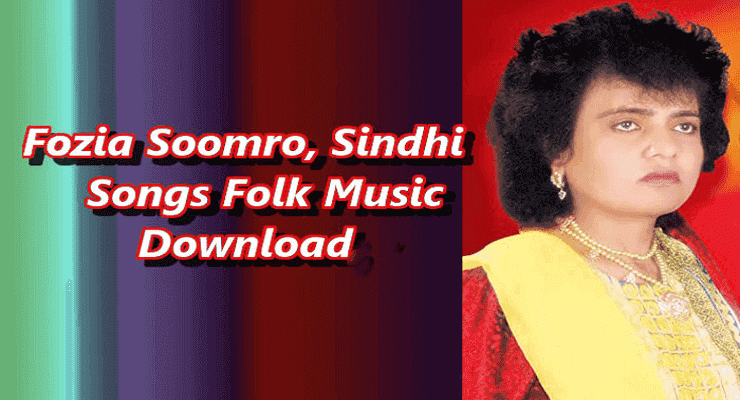 Marwari Music has been sung by a lot of great artists from Therparkar Sindh but the Fozia Soomro was the only artist who has sung in the new style in Sindh and Dhadki and also other local languages and mixed in Sindhi.

Cultural Sindhi songs were sung by Fozia Soomro, such as Folk Music, Sindhi Classical Music, Sindhi National songs and folk music of Sindh have been famous and listening in different wide areas of Sindh such as in CD Disks and audio, etc.

Dholki and Classical music masters in Sindhi folk songs spreading in the local areas, and artists performed well since old times history, from those singers Fozia Soomro was too popular in Sindhi culture, especially in marriage songs, local Sindhi music.

Fozia Soomro was born in 1966 in Weera Wah Village Karoser Therparker Sindh, her original name was “Hakeema”. She got musical training from Ghulam Hussain Kaleri, “Dholak Master”. She was the most popular Sindhi Classical Songs artist and she has sung super hit Sindhi and Marwari songs and also she has sung in the Sindhi language with zeal and enthusiasm and her faith and affection for Sindhi culture.

She was a well-known artist of Sindh and she creates great names in Sindhi Music, her great songs are very popular from time to time in different “Mehfils” and other Festivals of Sindh, especially in Therparker.
Her sweet sound attracted the hearts and now every time her Sindhi songs listening in the Streets, Shops, Hotels, and Vehicles in regions of Sindh and Therparker villages, due to her great performance in Marwari and Sindhi Mousiqui she was still called “Sindh Ji Koel”.

She had sung poetry of most popular Sindhi poets, she was awarded the “Shah Latif Award”, Radio Excellence Award, and Syed Misri Shah Award.  She was a popular artist on Radio Pakistan and Pakistan Television and other local channels she had sung  Sindhi songs with great style, her great style songs have still been listened to in Sindh.

She was a popular singer still the majority of people of Sindh likes, Lok Geet, Sindhi Sehra, Sindhi Folk Music, cultural Sindhi songs, and Marwari Songs, such as her popular song “Alay Mohinja Maroara” was a dance Music in Sindh, this great song was sung by Fozia Soomro in new and demanded style.
How to download Fozia Soomro Sindhi Folk Songs?

Fozia Soomro has sung a lot of great songs, and a large number of volumes are available but, I have selected below the most popular Sindhi Songs, Marwari songs were sung by Fozia Soomro in different Mehfils and on Radio and TV. You can download it with one click.

The following Sindhi songs were sung by Fozia Soomro, in different Mehfils, marriage ceremonies, and other local events, you can download them from the above-selected top hit 20 songs.

Music from Sindh territory is sung by Fozia Soomro in the Sindhi language and is for the most part performed in either the “Goads” or “Waee” styles. The Baits style is vocal music in Sanhoon. Waee Bait is performed in an assortment of ways utilizing a string instrument. Waee, otherwise called Sindhi songs and Sindhi Kafi.

Waee and Sindhi songs and Kafi are found in the encompassing zones of Balochistan, Punjab, and Kutch. It was created and searched by Shah Jo Risalo by Hazrat Shah Abdul Latif Bhitai R.A and some “Surs” and classical Raag.

The most established distributions of Shah Jo Risalo of Hazrat Shah Abdul Latif Bhitai R.A, contained nearly 36 Surs, however, later the majority of the etymologists disposed of 06 “Surs” in the Sindhi language. Dr. Nabi Bakhsh Baloch, the most prestigious etymologist of the Sindhi language has assembled and printed another release following 32 years of research in society and culture. Famous Artist Abida Parveen has recorded the majority of Shah’s Sur in her 11-volume CD Shah jo Risalo was released in December 2013.

What is Classical Music and how is it played in Sindh Singer Fozia Soomro?

Old style music and Classical Music were created or established in the customs of Western culture, including both formal strict, and common music. The classical music in Sindh is too old, and artists have sung it in different styles, from time to time.

Classical Music in Sindh is an increasingly exact term that is additionally used to allude to the period from 1750 to 1820, the Classical Raag Rang is about the wide range of time from before the sixth century AD to the current day are still continued in the Sindh region.

Classical music which incorporates the folk songs of Sindh is very famous in the old classical time frame and different periods, in the region of Hindustan and Sindh. The focal standards of this custom got classified somewhere in the range of 1550 and 1900, which is known as the regular practice time frame and the musical history in the time when classical music was sung by artists.

Entertainers who have contemplated traditional music broadly are said to be “traditionally prepared”. This preparation may originate from private exercises from instrument or voice instructors or from the fruition of a conventional program offered by a conservatory, school, or college in old times.