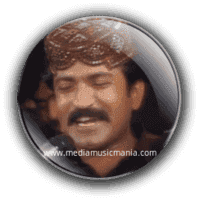 Ghulam Hussain Umrani was born in 1975, he has sung very hit songs, for youth Sindhi culture, peoples like his songs due to great style in “Chapri and Yaktaro” was popular instrument of Sindh.

He is also sung Sindhi Classical Music on the Shrines of Buzrigs. He is famous Artist of Sindhi Pop Music, and also sung sung poetry of most popular Sindhi poets. Now in these days the Music of Ghulam Hussain Umrani.