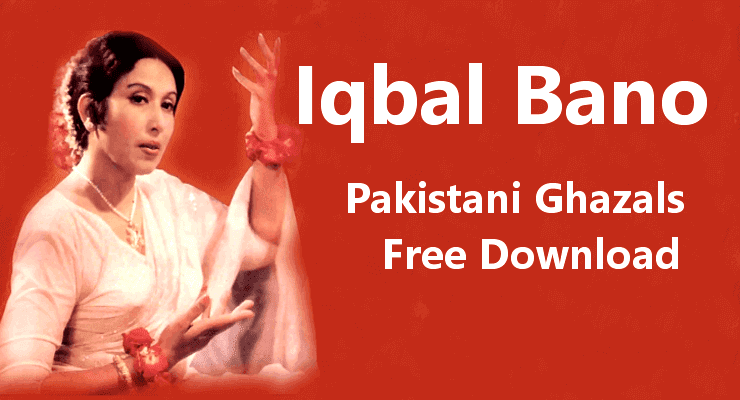 Iqbal Bano was duly initiated Gaandaabandh Shagird of her “Ustad”. Iqbal Bano was considered an artist in singing the Ghazals of Faiz Ahmed Faiz. Iqbal Bano was later invited by Radio Pakistan for Classical performances. Her public concert took place in 1957, at the Lahore Arts Council.
After marriage in 1952, Iqbal Bano moved to Multan and she started singing. She got Pride of Performance in 1974 from the Government of Pakistan. She was a star in  singing soundtrack songs for famous Urdu Films  “Gumnaam 1954”, “Qatil 1955“, “Inteqaam 1955”, “Sarfarosh 1956“, “Ishq-e-Laila 1957”, and “Nagin 1959”.  I have selected below the most Popular Music of Iqbal Bano.

Iqbal Bano was born in Delhi India in 1935. She has sung in different languages such as Urdu, Punjabi, Saraiki, and other languages she is a great artist of Punjab Folk Music. She was a very renowned and legendary Ghazals Singer of Pakistan.
At a young age, she started singing and she got Music training from Ustad Chaand Khan of the Delhi Gharana, an expert in all kinds of pure Classical Music and Pakistani songs. This great Artist died on 21 April 2009.