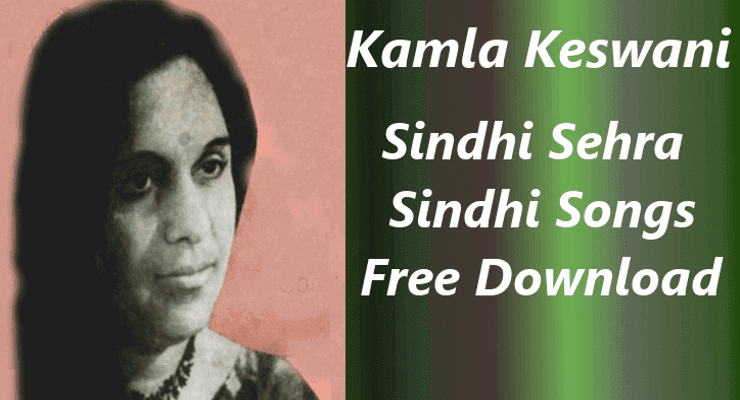 Kamla Keswani had sung a lot of songs in the Sindhi language, and she shows love for Sindh Dherti. She is still very popular in the Sindhi society of India and also people of Sindh like her great songs. She was got a lot of Awards many times and trophies for the best Sindhi singer. She was very popular on All India Radio.
The singing style of Kamla Keswani happens in a live setting, perhaps at an outside Mehfils, she has sung Sindhi Lada, Sindhi Sehra moreover in wedding ceremonies. She showed such a new style in Laada like “Bhagwani Navani” and other Sindhi Artist of India.
Kamla Keswani performed well and was appreciated by Sindhi Peoples, her songs scattered from one town to the next town and villages. I have selected some post-popular Sindhi Sehra, Lada, and Lok Geet of  Kamla Keswani.

Kamla Keswani started singing Laada in the Sindhi Language, and also she had sung Sindhi Lok Music, she was a very famous Artist in Sindhi Songs. She was very popular when she started singing Sindhi Sehra, Laada, Sindhi Folk Music, and traditional Sindhi marriage songs and become popularity her name in the household of Sindhi families.
Sindhi peoples also had to listen to her Sehra in the marriage celebration, her popular Laada are “Laado Laar Wendo” “Kunwar Re Tu Khi Chha Khapi” “Wetho Dhedru Ladhe Je Dharhhi Shra Te” and Ludhado Ladho Chralibelo Shahijadi” and another lot of popular Sehra, Lada is an integral part in Indian Sindhi society and also in Sindh.