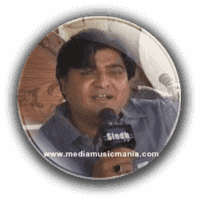 Master Manzoor Sindhi Pop Music Singer. He was belonging from District Shahdad Kot Sindh, he studied in Dadu Sindh and he got
graduation from “Karachi University” in 1997.
He created great name in
Sindhi Music, later he moved from Dadu to Hyderabad and he sung in “Radio
Pakistan”. He was most popular on local TV Channels and he sung famous Sindhi Songs.

Master Manzoor started singing in his childhood, his father was great Music Teacher. Master Manzoor was very popular in his young age, he sung Pop Music, Sindhi Classical Music on lot of Sindhi Private TV Channels such as KTN TV, Kashish TV, Sindh TV. I have selected below most popular  Hit  Music  of Master Manzoor.

He was very popular in his early age when he started singing on stage, Sindhi Pop Music in marriage ceremonies and other local parties. He sung lot of albums, including lot of great songs I have selected for downloading in mp3 format.