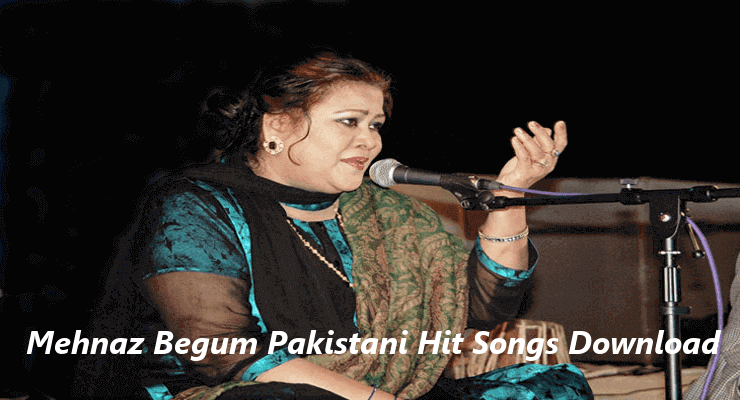 Mehnaz Begum Pakistani Ghazals Singer. She was a great legendary Singer of Pakistan, and she created a great name in Pakistan Filmi Music. She was a Pakistani singer, well known for her Film appearances. She has sung a variety of genres but specialized in Urdu Ghazals, Thumri, Dadra, Khayal, Drupad, and reciting Salam, Noha, and Marsiya.

You Like Also: A. Nayyar, Mala Begum, Akhlaq Ahmed, Ahmed Rushi, Tina Sani
Mehnaz Begum was the daughter of celebrated sub-continental singer Kajjan Begum. She was not married but some of her favorite hobbies included bird watching and admiring nature. Her favorite television show and movie was Franklin (show) and Bambi (movie).
Listen to Download Mehnaz Begum Pakistani songs
Mehnaz Begum also delighted in drawing various flowers and birds. Mehnaz Begum was great Classical Music Singer, Folk Music Artist. I have selected below the most popular Ghazals Classical Music of Mehnaz Begum.

Mehnaz Begum was born in 1950 and she was very popular her great talent, and she was well known and famous among the masses. She was great legendary Pakistani Folk Music, Classical Music Artist, she has sung in Pakistan Film Industry he a lot of great Pakistani songs still are very famous all over Pakistan.
Mehnaz Begum has won the Nigar Award for Best Female Playback Singer 13 times. She was awarded Lifetime Achievement Award by Lux Style Awards. This great legendary singer died on 19 January 2013.